How Blockchain and Bitcoin Can Disrupt the AP Process. In a Good Way.

Blockchain. Cryptocurrencies. Bitcoin. These continue to be hot topics in today’s daily business news. It’s all still a bit of a mystery to most of us. It started with bitcoin (a cryptocurrency) in 2013 and “the idea of a digital currency used to buy anything from music to cupcakes couldn’t have been more exciting, or more timely, as technology continues to advance at lightning speed.”

When we think about earlier disruptive technologies, consider for example, PayPal. It was brought to market during the times when consumers could not imagine money transfers outside of their bank accounts. It expanded rapidly from its inception in 2000 to 2005, when it became a widely adopted and trusted form of transferring money and making payments.

Blockchain is the platform used for verifying and recording transactions that’s at the heart of bitcoin and is considered as having the potential to reshape the global financial system, among other industries.

We sat down with Laurent Charpentier, chief innovation officer at Yooz North America, a leader in cloud-based AP Automation solutions. Recently, Charpentier gave his thoughts on how artificial intelligence (AI) impacts accounts payable. Now he offers his views on this up-and-coming disruptive technology and how it might impact the AP process.In a good way.

Q: Last year Jami Dimond, CEO of JPMorgan Chase received a lot of attention on the financial news outlets for calling bitcoin a fraud. What do you think of bitcoin as a legitimate form of currency?

Charpentier: One year ago, bitcoin’s value opened at $7,382.45 and it closed today* at $6,473.40, with a total value of nearly $112 billion. While down from a year ago, the value does still continue to rise. So, yes, people and businesses are using bitcoin as a cryptocurrency or investing in it…certainly taking it seriously. Some are becoming wealthy with it.

Companies are embracing bitcoin as a form of payment, even Fortune 500 companies like Microsoft, Intuit, and Expedia. The questions now become, how do we continue to measure the value of bitcoin in relation to money? And beyond that, how do we see it shaping the business world? Even our personal world?

Q: And blockchain as a legitimate way of managing transactions?

Charpentier: Sure! More than 100 banks including Barclays Bank Plc and JPMorgan Chase & Co. have joined the R3 consortium, an operating system for financial markets with a ledger/ blockchain platform to track money transfers and other transactions. The use of blockchain by banks and other companies is secure with new forms of encryption that can keep transaction details private while allowing a network of users to verify them. Nasdaq Inc. is also using blockchain for trading securities in private companies.

Q: How does blockchain apply to the accounts payable process?

When you consider the procure to payment (P2P) workflow specifically, an important part of the process is matching an invoice to the P.O. That can also be the step where delays or errors happen. With this platform, the records are all stored in the blockchain, and the provenance, authenticity, and accuracy of these records are guaranteed. There would be no need to check an invoice against a P.O. One day, it might even eliminate the need for an invoice. Blockchain can be a smart contract between trading partners and also help the financial operations team become more strategic. It can also connect vendors to buyers, and customers to business.

At Yooz we’re already doing much of that with our cloud-based AP Automation solution, helping companies evolve from a manual, paper-laden process to a digital, fully automated workflow. From there, going from digital to blockchain doesn’t seem like such a huge leap.

Q: From a thought-leader viewpoint, what industries or companies will be the next big adopters?

Charpentier: It’s not just financial institutions. I read how Walmart is using blockchain to manage food safety in its supply chain. This indicates that any business with global shipping and logistics can benefit. I project advertising and real estate will be two others. And of course, crowdfunding, which has become a popular way for small businesses, start-ups, and causes to fund a project or venture by raising many small amounts of money from a large number of people via the Internet.

Entire processes can be tracked in one blockchain ledger. One day maybe even replacing a company’s books.

Q: What problem do you think blockchain and cryptocurrencies like bitcoin solves?

Charpentier: I see the potential for a common global currency. Think about it. Now, when you are transferring money internationally, for example, you need a lot of information—the other party’s bank account information, exchange rates, data and fraud protection, etc. All of this is solved by blockchain. It can disrupt our reliance on traditional banks. Would we even still need banks? We are operating in a global economy bogged down by so many different types of currencies and bank regulations from country to country. This could streamline business transactions across nations.

It’s fascinating to imagine what a new world bank would look like! 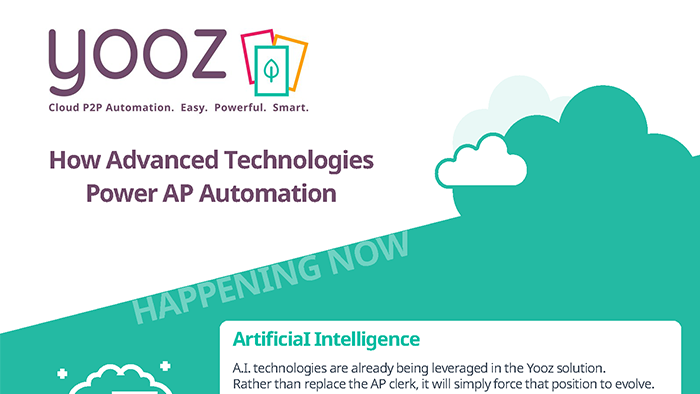 Welcome to the AP Data Age

On the Edge: Five Technologies Shaping the Modern Finance Office