Invoice payment processing (AP) clerks at leading companies are already seeing AI technologies like machine-learning and robotic process automation (RBA) programs automate and streamline their daily work, flag suspicious invoices, reduce cycle time, and save their organizations money. And with the help of AI, AP clerks are freed to do more value-added work.

Artificial intelligence is boosting efficiency and making life easier for thousands of AP professionals today. But many of these professionals are undoubtedly wondering if sophisticated software might one day put them out of a job.

The fact is, workers today at nearly every level—and across nearly every industry—are worried about the same thing. Robots are waiting on hotel guests in some countries, while algorithms are writing movie scripts, drones are analyzing crop yields, and IBM’s supercomputer is diagnosing disease. And let’s not forget about self-driving cars that are able to detect pedestrians and park themselves (often better than humans do).

How long will it be before the human touch is declared redundant? Worse, what will a robot bring to the company pot luck lunch?

Human workers being displaced by intelligent machines is a real possibility in some sectors. But if history is any judge, job displacement is just the first chapter of a much longer story, a story that ends with humans and machines working productively side-by-side.

Automation can lead to job loss, sure, but it often creates new jobs as it renders old ones obsolete.

Here’s one example: The personal banking sector saw tremendous upheaval after the introduction of ATMs in the 1970s. After a phased rollout of ATMs in a limited number of bank branches, their numbers quadrupled from around 100,000 to 400,000 between 1995 and 2010, according to James Bessen, a lecturer at the Boston University School of Law who analyzed automation trends in a report to the International Monetary Fund in 2015.

Tellers were quite naturally worried about their positions being eliminated and yes, the number of tellers at individual branches declined as ATMs became more abundant and the number of things you could do at an ATM increased, such as cash and check deposits. But the cost of operating a bank also dropped. This meant that banks could open more branches, which in turn upped the demand for human workers. And even with the introduction of new consumer payment technologies like PayPal®, Venmo, and Zelle®, personal banking still today is a combination of people and machines, and the result is a business sector that does a much better job of serving the customer.

While consumers are pleased with the convenience of drawing funds out of a machine, bank tellers—with with hours’ worth of mundane tasks now off their plates—can concentrate on the type of work that a machine may never be able to handle: forming relationships with the customer.

The ATM, then, didn’t eliminate the bank teller.

It evolved the teller’s job.

Fear of job loss to machines is often predicated on the idea that one’s workplace could become fully automated. But we prefer to think in terms of partial automation—a far more likely and less nerve-wracking scenario.

Partial automation is already changing the game in industries that many believed could never be automated. Intelligent machines are working alongside doctors, lawyers, engineers, stock traders, and military commanders. And it is changing the way finance teams manage their workflows.

If partial automation has not yet arrived in the accounts payable department of your organization, it likely won’t be long until it does. Rather than replacing the AP clerk, it will simply force that position to evolve. And that’s where the automation process ceases to be frightening and becomes exciting.

When an AP professional is no longer spending long hours examining, manually entering piles of purchasing orders, receipts and invoices, tracking down lost invoices, and fixing errors, what might that person be doing instead? As machines increasingly take over repetitive and time-consuming tasks, the AP clerk will more frequently ask, “What can I do that a machine cannot? In what creative new ways can I add value to my organization?”

Some of the new duties and responsibilities of the AP clerk have not yet been discovered, while others are already taking shape today. In midsize businesses, the AP department is increasingly playing a much more strategic and central role. That’s because automation lets people graduate from “data entry” with almost no impact to data analysis and collaboration. Add in machine intelligence, and the AP department becomes part of a broader sourcing strategy.

Here are two examples. Data analysis helps a company discover trends and discrepancies within its vendor network, but it still takes humans to act on them.  Imagine you’re managing restaurants at dozens of locations. Accountants can analyze what they’re paying for specific food items store by store. They might realize that the same vendor is charging more at some locations. Or the same product might be supplied by two different vendors.

It gives you the timely information to start a conversation with your suppliers to either consolidate with the cheaper provider or to renegotiate payment terms. That kind of dialogue, coupled with more on-time payments, strengthens those valuable relationships.

AI can also help with supply chain financing. When it comes to early payment discounts, some companies don’t want to take advantage of those because their cash flow doesn’t allow them to, so they tend to pay as late as possible. In reality, it’s often cheaper to borrow money to pay early than to not take the discount. With the extra time automation brings to the mix, the accounting department can suddenly make a difference in supply chain financing.

We’re only in the early chapter of a much longer story when it comes to the automation of work done by humans today. Intelligent machines will redefine our jobs as they boost productivity.

Rather than taking your job, partial automation powered by AI might become your new favorite co-worker.

Just don’t expect her to pick up the tab at happy hour. 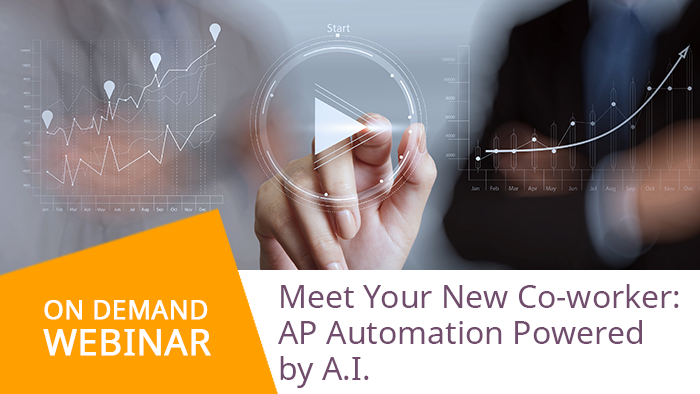 How Robotics Process Automation Takes the Robot Out of the Human

In a World Highly Connected, How the Cloud is Making a Strategic Difference