RPA Accounting Is Taking The Robot Out Of The Human

Business moves fast. As modern CFOs focus on strategic priorities, automation powered by AI will become even more critical for handling routine accounts payable tasks such as invoice processing and vendor audits. And RPA (robotics process automation) will be a key factor in accounting and technology.

The Emergence of RPA Accounting

If your finance and accounting departments have not already embraced automation, or are at least moving in that direction, you will soon. According to a study by Oxford University, nearly half of U.S. jobs will be subject to digitization, and the global RPA market size is expected to reach USD 3.97 billion by 2025, according to a new study by Grand View Research, Inc.

Organizations will need to embrace RPA and other emerging technologies in order to scale gracefully and remain competitive. It's becoming more apparent that AI, machine learning, and RPA will serve to enable organizations to proactively navigate potential issues and opportunities, rather than simply react. Instead of replacing full-time employees, for example, automation can absorb mundane tasks such as data entry and manual routing of invoices, freeing up staff for more value-added contributions.

RPA is also expected to further streamline and improve the financial planning and analysis (FP&A) process over the next several years as adoption becomes more widespread. More than half (58%) of companies expect RPA to have a significant impact on their FP&A processes over the next two years, according to Finance in the Digital Age, a recent survey conducted by the Genpact Research Institute and analyst firm HFS Research.

Where does RPA come in with regards to invoice processing (AP) automation?

RPA is designed for very structured tasks with little need to interpret data. The most obvious function is manually entering data from a paper invoice into the system, among other equally dreary and uninteresting tasks. As Leslie Willcocks of McKinsey puts it, “RPA takes the robot out of the human”.

Afraid RPA—or software “bots” will take over your job? Don’t be. Willcocks goes on, “RPA mimics the activity of a human in carrying out a task within a process. It can do repetitive stuff more quickly, accurately, and tirelessly than humans, freeing them to do other tasks requiring human strengths such as emotional intelligence, reasoning, judgment, strategizing, and interaction with the customer”. But in order for RPA to start inputting data, it needs human intervention for the initial implementation.

The Benefits of RPA Accounting

Now let’s explore what an AP professional’s work life looks like before and after RPA. We predict that as RPA becomes more infused with cognitive capabilities, it will streamline processes with semi-structured and unstructured data as inputs—including extracting data from documents such as contracts and invoices—boosting productivity of the finance team overall and the AP process in particular.

Before RPA: An invoice arrives from a vendor by email, or worse, as a paper document in the mail. An employee downloads the attachment or scans the paper document, searches for and matches the invoice against a purchase order in the ERP system, manually enters the data into the appropriate fields, and puts the invoice into the proper queue for processing.

Then the employee repeats the process for each invoice received.

Imagine doing that one task hundreds of times a month! That is the mundane reality of many AP clerks in companies who don't automate their accounts payable workflow. Not to mention the opportunities for keying errors, duplicating invoices, and misplacing or losing documents in the process which can lead to additional, unexpected costs.

After RPA: Software robots can be configured to automatically process invoices upon arrival, whether they arrive electronically or on paper. A robot uses OCR (optical character recognition) to read the invoice, match it to the purchase order, and route it to the proper queue for processing without additional, unexpected cost from human error, mailing payments, or losing documents.

The bots won’t ever lose track of a document or make a calculation error. Nor will it ever become bored from multi-step mundane tasks!

The impact? “Machine learning, AI, and RPA will go beyond invoice routing to take purchase-to-pay process automation to the next level,” explains Yooz COO Laurent Charpentier. “I believe breakthroughs in these various technologies are going to allow finance leaders take the next step, to not only understand AP invoices but also gather intelligence from contracts as well”.

“Modern CFOs are embracing the idea that the finance team should not be spending time on manual transaction-based activities, and they have been taking advantage of automation wherever possible”, said Brett Brenner, managing director, KPMG.

He goes on, “Companies are looking to up-skill and prepare their financial workforce for the future. Automation will continue to relieve them of the transactional details so that they can focus on the bigger picture of driving profitability”. 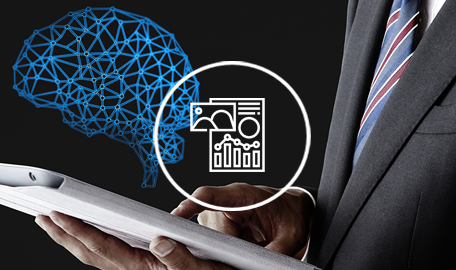 Powerful Technologies Deliver the Most Automation for AP

THE FUTURE OF EMPLOYMENT: HOW SUSCEPTIBLE ARE JOBS TO COMPUTERISATION?, retrieved on 2019-09-10

Five Factors That Will Shape the Modern Finance Office, by CFO an Argyle Company, sponsored by Yooz.

AP Automation In The Cloud Or Down On The Ground?